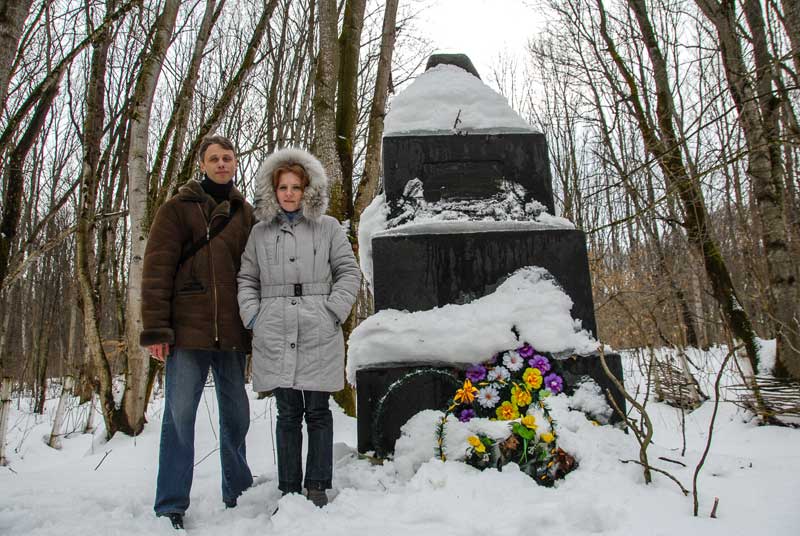 The purpose of visit was to learn where graves are precisely placed and what a condition.

For a long time some of our readers and the Jews who living abroad, are interested in this question. Today I will tell about it in detail.

Under article I put the map detail showed the shortest route from Krasilov to graves. The total length of the route from the town centre to the destination is approximately 25 km. In winter, the road takes about 1 hour.

In my opinion the best time to visit the graves is the time of second half of spring, summer, beginning of autumn. The main thing it have to be warm and dry time.

In winter the graves hard to get because of the snow and the lack of roads. In the spring you need to select a time to avoid the rainy season and the ground was dry. Otherwise, the terrain is not passable. There are two graves in the forest, around the field.

So we drove around the Rosolovcy village and got to the Manivcy village.

The Tomb in the field

This tomb on the map I outlined under # 1.

It’s in an open field. If you enter to Manivcy from side of Rosolovcy, the Tomb will be on the left side in the 400 meters from the road. 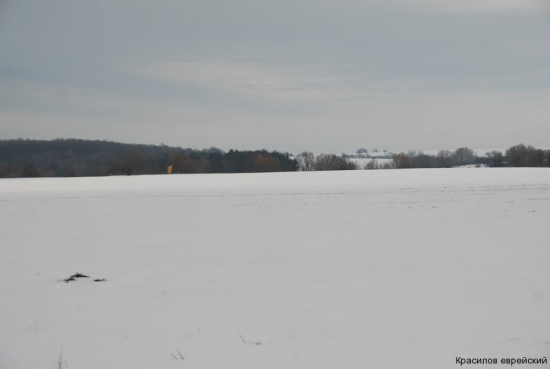 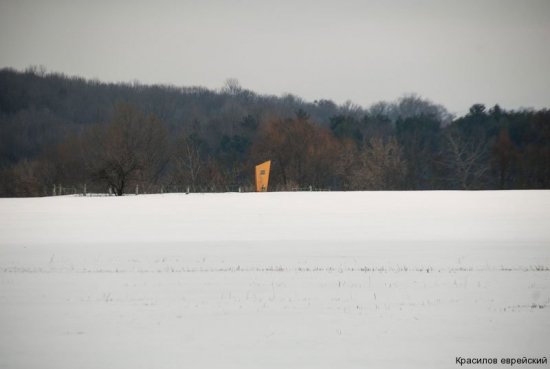 Tombstone territory is fenced and the monument is painted in yellow. We were unable to examine more closely the grave because of the lack of roads. In winter it is problematic.

According to eyewitnesses in August (or September) of the year 1942 the fascists with the help of the Ukrainian policemen shot the Jewish craftsmen. It was the second stage of the shootings. The fascists kept for different works these Jews.

Graves in the forest

To get them you need to go through the entire village…

… We pulled up to a small lake and the road is ended. Right before us was forest and to the right side was the field. 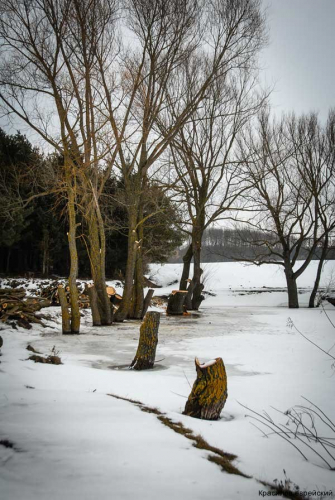 Then we went on foot. We were walking along the forest by track which paved the locals. 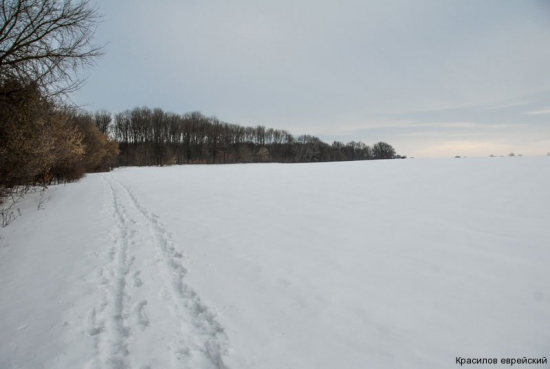 Stepping out on the field, right at the edge of the forest, you may notice dark monument, near which the little trees and because it is viewed from afar. 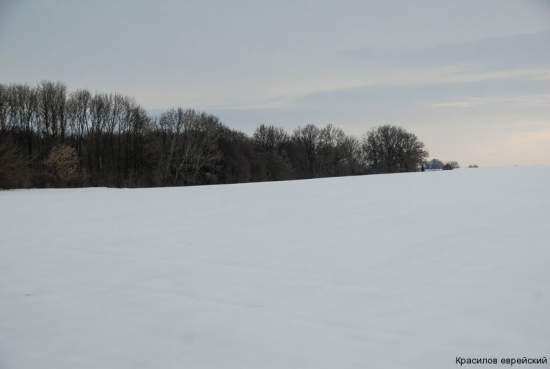 The first Tomb in the forest

But we decided that at first we will visit the Tomb in the forest (on the map I identified it as # 2). Through 200 meters we entered the forest. In the Woods we walked more 200 meters by a narrow footpath which like wanted to fold us in deep snow. We walked in silence, everyone was thinking about something own. I thought about whether we go. And also I had imagined, as in the summer of 1942, through the green forest which full of life and singing birds sang, the fascists were a doomed to death. And all wines of these people that they are Jews. Why? I think that the fascists saw in these chosen by God some threat for them like for election too as they thought. They believed that two elected cannot be at the same time. So they decided to sort Jews out once and forever.

Рекомендую прочитати:  We launched our page on Patreon

Here in July 1942, the fascists shot about 2000 Jews. It was the first stage of the shootings.

… And so we come to the correct place. If not for a tall dark statue against a backdrop on white snow, to find the burial place would be difficult. And in the summer this place is probably not at all recognizable. 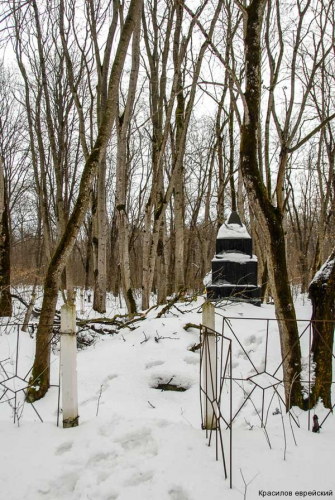 Near the Tomb, as well as throughout the road there are no signposts and markings. So to getting here you must know the way or take the helper – local residents.

First impression … How can I say? Is It not pleasant! Understanding what happened here is very straining and the area is not well maintained. Place looks dark and forgotten people. It’s first impression. 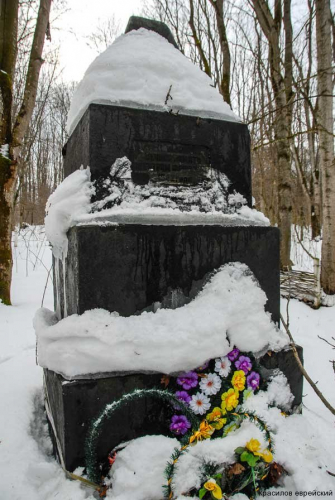 On the monument there is an inscription: “eternal memory to the victims of fascism of 1942year”. Not a single word about the Jews (this is a common practice of the Soviet authorities). 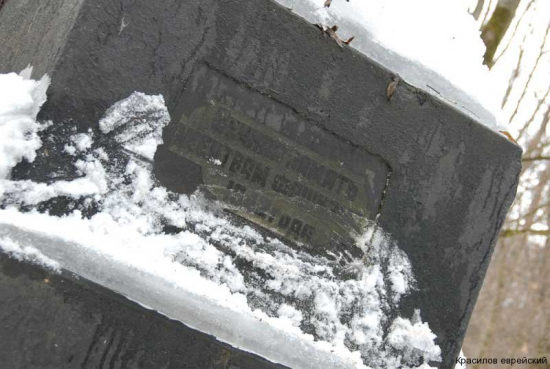 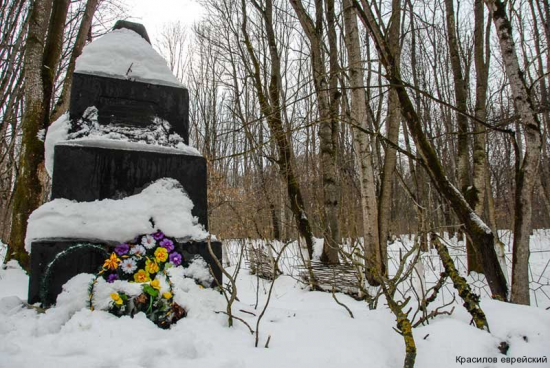 The fence is in poor condition. In some places it is missing and some included bars. The area was covered with a layer of snow from which in some places large branches felled trees sticking out. On such territory even dangerous to walk because feet could get stuck between the branches under the snow. 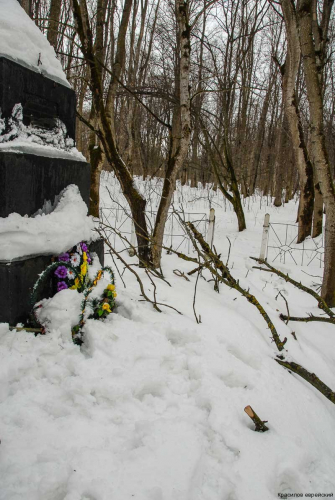 In some places due to fallen trees no fence. 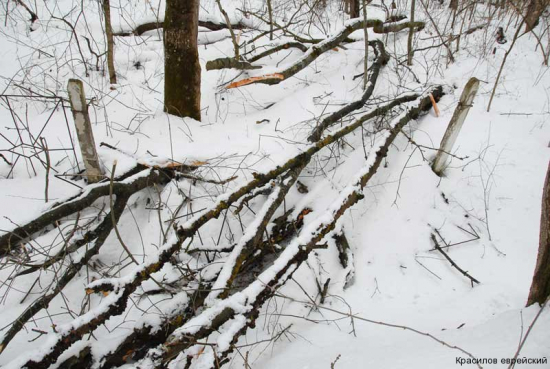 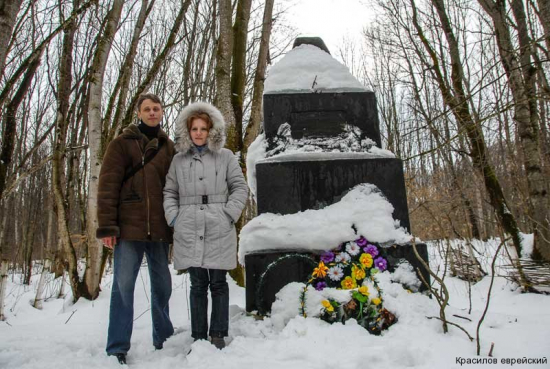 The second Tomb in the forest

We came back to the field and walked parallel to it for the next Tomb (map I identified her as # 3). Here in July 1942 during the first phase of the shootings killed the majority population of Jews. 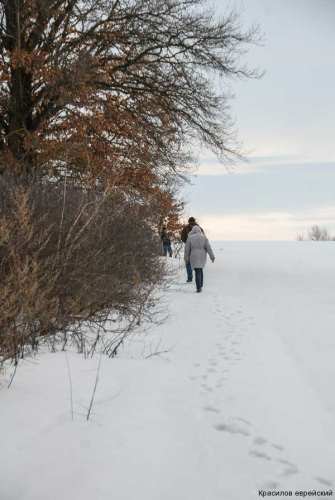 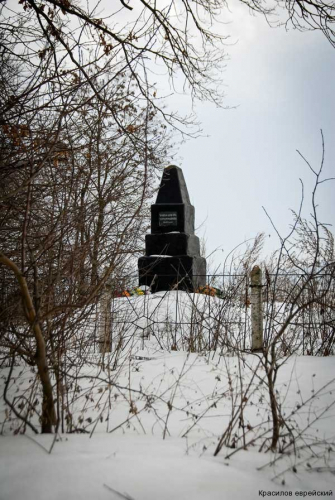 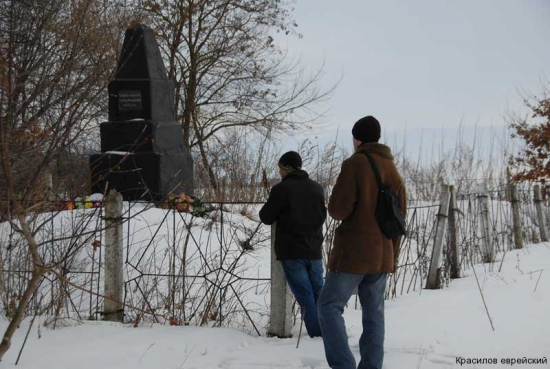 Here the territory of burial is in better condition than the first burial. 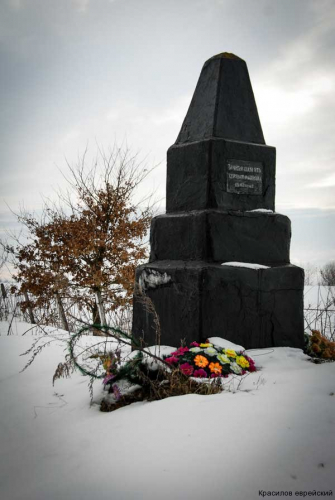 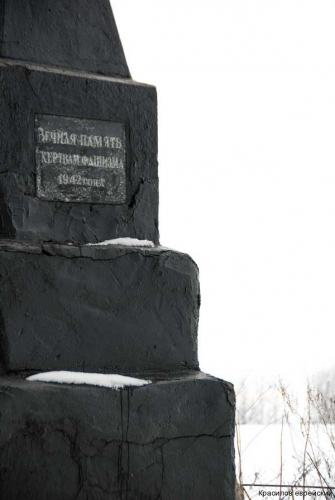 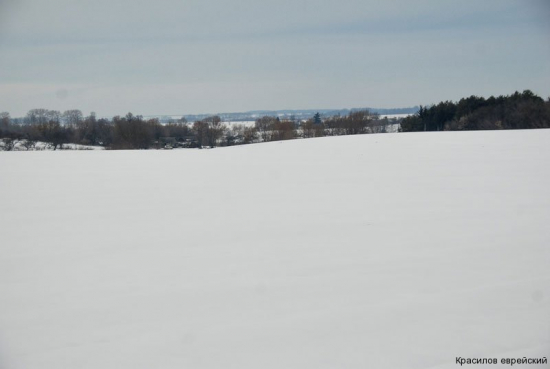 The village is well visible from here. The grave is located on higher ground and because the shot gun could be heard far away.

…Barking dogs, gross screams collaborators plea of victims for mercy for their children, a prayer to the God of Israel and sighting shots — that filled the air in July 1942. The 6 February 2013 from the heart quietly pulled prayer “God forgive your people, forgive the executioners of the Ukrainians-participants, forgive and those who stand by silent and did nothing to prevent a catastrophe. Forgive and me as one who hatred Your people!” 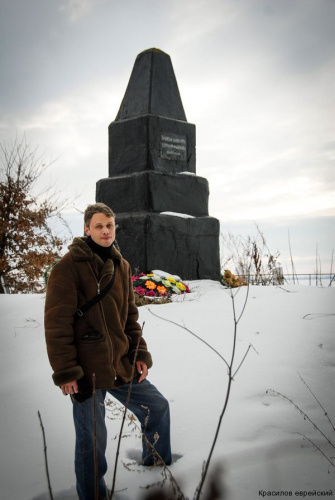 (Nikolsy Pekarsky – the editor of the website “The Jewish Krasilov”)