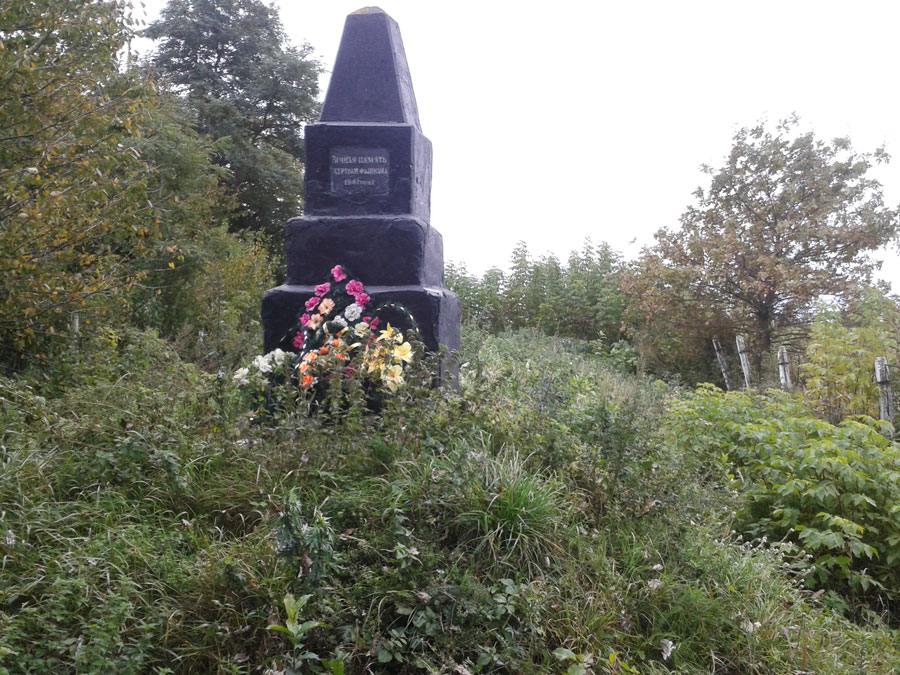 We, the descendants of the Krasilov Jews who perished over 70 years ago, are addressing to your collective memory of those terrifying events of 1942. Three murderous actions of 1942 (May 25, July 17, and September 11, the eve of Rosh haShana) were performed by Nazis and their local collaborators, in which all prisoners of the Krasilov ghetto, both native residents of Krasilov and Jews of neighboring settlements, were brutally killed in the vicinity of the village of Manevtsy. We know that many of you lost your close relatives there. We are also addressing those Landsleit whose ancestors emigrated from their native Volhynia in the late 1800’s and early 1900’s, having saved most of their families from the terror of Soviet and Nazi regimes. We are all involved in this tragedy. You should know that no traces of Jewish life were left in Krasilov, but these graves. Both Nazis and Communists exterminated the Jews and the signs of the long Jewish presence in the area.

In whole, the amount of our kedoishim (martyrs), who were murdered at Manevtsy, made up 4,500 – 4,800 men and women, the elderly and the children. Before each of three actions, a huge hole had been dug at the edge of the forest or in the field. These holes became the burial places for all of them. Very few prisoner of Krasilov Ghetto, among them Basia Tenzer, Faina Gruber, and Moishe Katz, miraculously survived the Holocaust contrary to Nazis’ goal to eliminate every single Jew.

After the war was finished, the tiny group of Jews who returned to Krasilov, Kuzmin, etc. from evacuation places and from the fronts of WWII, could raise money and overcome the bureaucratic obstacles, and three big monuments were erected on those graves in 1948 and 1961.

Several decades have passed, and the condition of these monuments and fences around them become deplorable. We need to reconstruct or, at least, to repair, the whole Memorial. Besides, it’s right time to replace the plaques attached to the monuments in the Soviet period. They speak about Soviet civilians, victims of fascists, but NOT about our dear Jewish martyrs, killed because of Nazis’ overwhelming hatred to all Jewry.

We believe it is necessary to think now about the proper commemoration of our martyrs – to do the same as our relatives did 67 years ago. If we do not step in now who else will do this job? We are the last generation who must return our debt of memory to the martyrs, so we ask you all to join us in this holy project. For its realization, certain funds are needed. Therefore, at first, it’s necessary to collect our donations. Our second task is to find expert(s) who will perform the project of the Memorial’s reconstruction which we all will discuss. And the third one – we should get the local authorities’ approval of our project, because our monuments are the objects of state guard, and none of us has right to change any little bit of them without permission received from administrators of different levels.

And the last, but no way the least: to help us, we have a wonderful Krasilov native, Nikolay Pekarsky, a young man of exclusively bright personality and rare virtues. He is the founder and administrator of the “Jewish Krasilov” website, mainly for Russian-speakers, and also the author and the editor of many articles presented on it. Because of this website, many of us met each other and visited, in virtual space, the graves next to Manevtsy. We could estimate their condition by ourselves. We are lucky – Nikolay has agreed to be our representative in the negotiations with local authorities.

We wish to know your thoughts on the issue which is presented above. Please email us soon so we can get started.